All Club Activities are suspended until further notice.  That includes the AGM, which was scheduled for 26 March.

The Smiddy is at the foot of An Teallach and handy for the northern Fannichs and the Fisherfield Munros.  Gruinard crag close by has good climbing and the loch offers kayaking. What is not to like?

The Moray Mountaineering Club’s 83rd Annual General Meeting will be held at 7:30pm on Thursday 26 March 2020 at Elgin Town Hall (Supper Room). Please support your club by attending (one free drink for members).

The management of the Club is vested in a committee comprising the Office Bearers (President, Vice President x 2, Honorary Treasurer, Honorary Secretary) and four Members. The current committee is:

Any member may stand for any of the positions. You do not need any particular experience just enthusiasm.  The allocation of specific roles and responsibilities is not defined in the Club’s constitution, but the current arrangements are:

The Annual General Meeting will be followed by

The annual J. Alister Sword photography competition will take place after the Annual General Meeting on 26 March 2020. The competition rules are:

1. Competition is open to current members of the Moray Mountaineering Club only.
2. Two categories: “Scottish” and “Non-Scottish”.
3. Any subject with a mountaineering theme (landscapes, people, macros, wildlife, etc.).
4. Entries must have been taken in the last 12 months.
5. Submit up to a maximum of two photographs per category.
6. Entries must be made as hard-copy on the night (please write your name and photo details on the reverse).
7. Full-size digital versions should also be emailed to (moraymountaineeringclub@gmail.com) (please include your name and photo details in the email). All entries for the Scottish category will be considered for the Moray Mountaineering Club’s 2016 calendar. 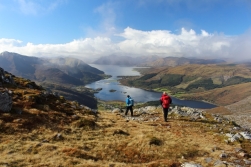 The bus will drop members off near Strathcanaird, allowing a traverse over Ben More Coigach and Sgurr an Fhidhleir – two outstanding Grahams.  Members also have the option of being dropped off to undertake ascents of Cul Beag (Corbett) or Stac Pollaidh (Graham). Stac Pollaidh has numerous climbing routes on weathered Torridonian sandstone. Various drop-offs en-route to Coigach are also possible allowing for ascents of the Beinn Dearg hills or from Ullapool, Meall Liath Choire or Beinn Eildeach via Ullapool Hill.

Please note this bus meet has been cancelled due to low interest ahead of the cut-off.

The Moray Mountaineering Club ceilidh, featuring Rory and the MTs, will be held at Bishopmill Hall on Saturday 22 Feb 2020 from 7:30.  Tickets are £10pp, including stovies.  Bring your own bottle.  Tickets are available from any committee member or at the door.  Friends, relatives, partners, non-members are all most welcome.

There will be a raffle with all proceeds going to Mountain Rescue.  Donations to the raffle are welcome.

Numbers for this meet were looking very strong until forecasts for Storm Ciara started to hit the headlines, whereupon there was a definite drop in enthusiasm. None the less, twelve hardy souls made the long drive with several doing something on the Friday to catch the best of weather.

Inbhirfhaolain is a pleasant hut about half way down Loch Etive and this was the first time we had been there for a couple of years.

First off was Dave Treagus who parked at the Glen Coe ski centre and went up Meall a’Bhuraidh watching a few desperate skiers attempting to do something on the ice. The ridge over to Creise was extremely windy with horrendous spindrift. Flying ice nearly chipped his upper central incisor so he beat a hasty retreat. Dave plus tooth survived intact.

Carol and Adele travelled over on Thursday and has an early start heading for Ben Starav finding the boulder slopes heavy going in the wind. At the summit after discussions about proceeding or retreating they fitted crampons and headed down the arete and continued on to Beinn na Aighenan enjoying the stunning views, but not the long walk back in the dark.

Joe, Ben and Sheila also squeezed in a hill on the way over with a quick jaunt up Geal Carn at Drumochter.

Saturday’s forecast was for an OK morning and steady deterioration thereafter so an early start was the plan for all. And indeed this plan came to pass though not necessarily quite as early as intended for some.

Dan and Sheena planned to leave about 06:00 with Glas Bheinn Mhor as their objective. They had a steady plod up the rough and boggy track to the bealach where they encountered a stiff breeze. They didn’t loiter at the summit but enjoyed the good views and the walk back down the boggy glen. 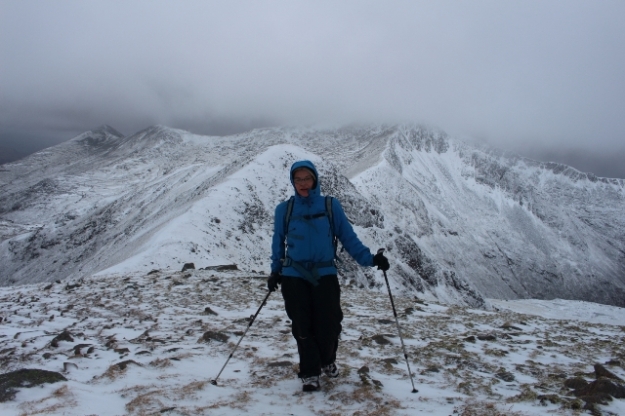 Carol, Adele and David also left early and headed for Sgurr na Ulaidh from the Glen Etive side. The weather was a bit of everything but not the rain and snow forecast, However the wind steadily strengthened as they went up the exposed ridge and they decided to turn back when about 200m from the summit. This gave them a chance to practise their ice axe techniques with glissades on the ice.

Ben, Simon, Anta, Alison and Joe had ambitions to ascend Creise via a scramble up the slabs on the east side. They set off from the ski centre and managed to cross the burn more or less dry foot. The slabs were covered with wet slushy snow and the wind was getting up so that choice became rather less inviting. Some discussions followed about which way to ascend instead, up the corrie perhaps or to the head of the glen and ascend from the bealach. And then what to do once they got there as the summit ridge, had they been able to see it, would have looked rather uninviting. So they ran away and scrambled up to the ridge of Meall a Bhuraidh, coming out on the edge of the ski area. From there the summit was just too close and tempting(??!) despite being out of sight in the clouds. So there they headed though Simon peeled off early (must be getting old) and headed back down, the others summitted in horrendous winds and made a hasty descent to the King’s House, almost beating the heavy rain. This is now a magalopolis hotel, though some of us can still remember the days when it was little more than a thatched cottage. Several beers and meals were consumed while watching the Calcutta Cup, which led to smug smiles of satisfaction from the English members of the group as Scotland lost.

Susan and Sheila paid more attention to the weather forecast and headed for the Glencoe visitor centre which is well worth a visit. The small museum there had what looked like Simon’s old duvet jacket which was a bit worrying. They then went for walk along the West Highland Way and headed for the Kingshouse. The hot chocolate there is to die for, better even than at Coco Mountain in Durness.

The forecast for Sunday included the words appalling, tortuous and whiteout and so it proved to be as storm Ciara crossed the country and nothing worth writing about was achieved. The river Etive in flood though was a spectacular sight.

Muir Cottage is a well-equipped mountaineering hut, situated amongst pine trees next to the River Dee.  It is less than two kilometres to the Linn of Dee, the starting point for most of the southern Cairngorm hills.  If there is snow about, then there are plenty of ski touring opportunities, or even a day at Glenshee Ski Centre.

A bike can greatly assist with access some of the hills in the area, especially those that involve the journey past Derry Lodge.

No less than 12 members in 5 cars rolled up to the car park at Melgarve by 1000 ready to climb Gairbeinn and then along the “ridge” to Corrieyairack Hill.

The road into the glen was fairly clear but with snow and ice in places. The weather forecast was for a sunny but windy day. It was indeed fine, but the biting wind at the car park was a harbinger of things to come. 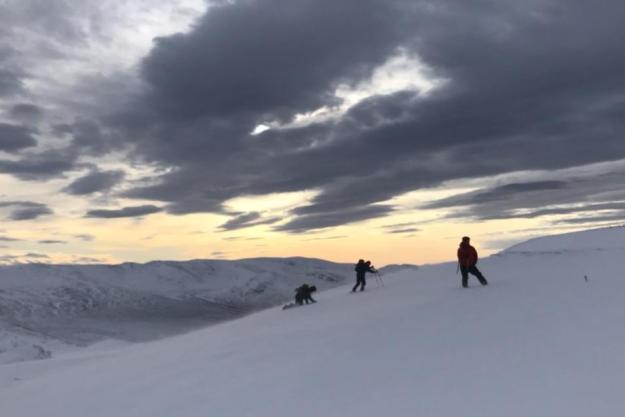 The party set off at a leisurely pace in one group. However, as they climbed the snow covered slope of Gairbeinn, the group split and Malcolm and Toni as back markers decided to tackle just the Corbett. After a short lunch stop out of the wind, they retraced their steps and arrived back at the cars around 1500.

Regrouping for the descent

The others pushed on and made good time to the summit of Gairbeinn. After a short stop, they descended north towards Corrieyairack Hill but found progress along the ridge difficult because of the very strong wind. All except Duggie decided to abandon the attempt on the second hill and they descended down to the old military road to the pass, arriving back between 1530 and 1600. Duggie, being the speedy walker he is, climbed Corrieyairack and still beat most of them back to the cars. 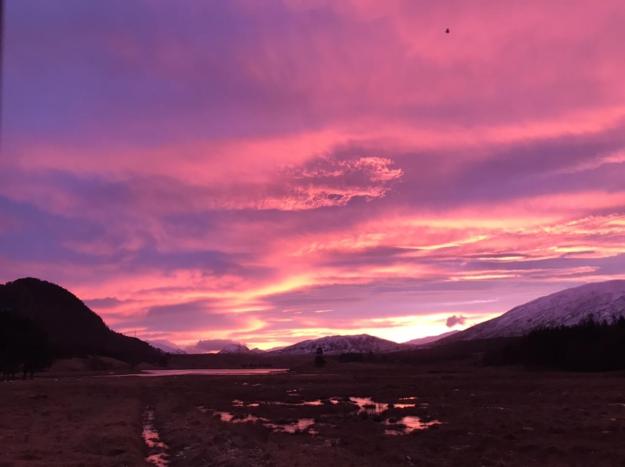 Sunset, with a Golden Eagle top right of photo (honestly!)

An excellent day’s walking was capped by a spectacular sunset and, instead of the usual pub stop, most of the party called at the Ralia Café by the A9 at Newtonmore for soup and hot chocolates.

February’s bus meet is to the Cairngorms.  There are plenty of high level and low level options for a fun day out. Do check the MWIS and SAIS websites for weather and avalanche risk and plan accordingly.

Winter Skills: We hope to have two of our experienced members sharing their knowledge and experience with those who wish to take part.  A number of topics will be covered including the use of ice axe and crampons.  Ice axe, crampons and helmet will be required, as well as your usual winter walking gear.  Dress up warm because there may be some standing around.

The club has some equipment, which can be loaned by prior arrangement (See here)

Contact Malcolm Campbell by email to book a place on the bus and/or Winter Skills.